U.N. Says Lag in Confronting Climate Woes Will Be Costly

Nations have so dragged their feet in battling climate change that the situation has grown critical and the risk of severe economic disruption is rising, according to a draft United Nations report. Another 15 years of failure to limit carbon emissions could make the problem virtually impossible to solve with current technologies, experts found.

A delay would most likely force future generations to develop the ability to suck greenhouse gases out of the atmosphere and store them underground to preserve the livability of the planet, the report found. But it is not clear whether such technologies will ever exist at the necessary scale, and even if they do, the approach would probably be wildly expensive compared with taking steps now to slow emissions.

The report said that governments of the world were still spending far more money to subsidize fossil fuels than to accelerate the shift to cleaner energy, thus encouraging continued investment in projects like coal-burning power plants that pose a long-term climate risk. 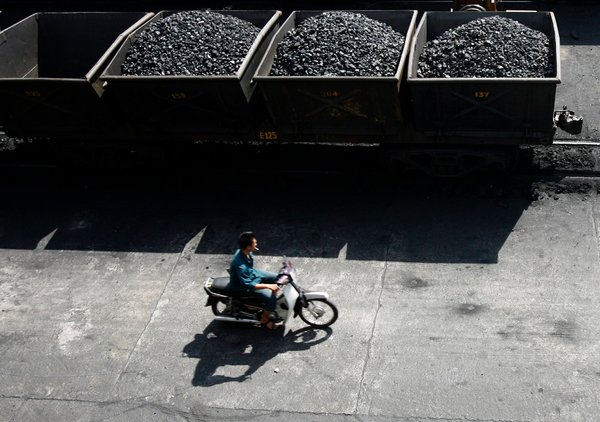 Coal in Vietnam that is bound for China. A United Nations draft report says more is spent globally on subsidizing fossil fuels than on shifting to cleaner energy. Kham/Reuters

While the spread of technologies like solar power and wind farms might give the impression of progress, the report said, such developments are being overtaken by rising emissions from fossil fuels over the past decade, especially in fast-growing countries like China. And one of the most important sources of low-carbon energy, nuclear power, is actually declining over time as a percentage of the global energy mix, the report said.

Unless far greater efforts are made to reduce emissions, “the fundamental drivers of emissions growth are expected to persist despite major improvements in energy supply” and in the efficiency with which energy is used, the report said.

The new warnings come in a draft report from the Intergovernmental Panel on Climate Change, a United Nations panel of climate experts that won the Nobel Peace Prize in 2007 for its efforts to analyze and communicate the risks of climate change. The report is not final, but a draft dated Dec. 17 was leaked this week and was first reported by Reuters. The New York Times obtained a copy independently.

Business leaders will tackle many of the problems raised in the draft next week, at the World Economic Forum in Davos, Switzerland, where a day will be devoted to addressing the rising economic costs of climate change — and the costs to businesses and governments of solving the problem.

Within the business community, “there is an awakening of increasing economic risk — a recognition that operating conditions are changing and we need to respond,” said Dominic Waughray, head of environmental initiatives for the forum. “There has been a failure of government to address these solutions. If there is an alliance of companies that can bite off pieces of the puzzle, it might help.”

In the dry language of a technical committee, the draft outlines an increasingly dire situation.

Even as the early effects of climate change are starting to be felt around the world, the panel concluded that efforts are lagging not only in reducing emissions, but also in adapting to the climatic changes that have become inevitable.

It is true, the report found, that the political willingness to tackle climate change is growing in many countries and new policies are spreading, but the report said these were essentially being outrun by the rapid growth of fossil fuels.

While emissions appear to have fallen in recent years in some of the wealthiest countries, that is somewhat of an illusion, the report found. The growth of international trade means many of the goods consumed in wealthy countries are now made abroad — so that those countries have, in effect, outsourced their greenhouse gas emissions to countries like China.

Emissions in the United States rose slightly in 2013, but are still about 10 percent below their 2005 levels, largely because of the newfound abundance of natural gas, which produces less greenhouse gases than burning coal.

The Kyoto Protocol, an international treaty meant to limit emissions, has “not been as successful as intended,” the report found. That is partly because some important countries like the United States refused to ratify it or later withdrew, but also because of flaws within the treaty itself, the report found. The treaty exempted developing countries from taking strong action, for instance, a decision that many experts now say was a mistake.

Efforts are underway to negotiate a new international treaty to replace Kyoto, but it is not even supposed to take effect until 2020, and it is unclear whether countries will agree on ambitious goals to limit emissions. It is equally unclear how much political support a new treaty will gain in China and the United States, the world’s largest emitters.

The Obama administration is pushing for a deal, but any treaty would have to be ratified by the Senate; many Republicans and some coal-state Democrats are wary, fearing economic damage to the country.

The new report suggests, however, that the real question is whether to take some economic pain now, or more later.

Nations have agreed to try to limit the warming of the planet to 3.6 degrees Fahrenheit above preindustrial levels. Even though it will be exceedingly difficult to meet, this target would still mean vast ecological and economic damage, experts have found. But the hope is that these would come on slowly enough to be somewhat manageable; having no target would be to risk catastrophic disruption, the thinking goes.

As scientists can best figure, the target requires that atmospheric concentrations of carbon dioxide, the main greenhouse gas, stay below 500 parts per million. The level recently surpassed 400, and at present growth rates will surpass 500 within a few decades.

If countries permit continued high emissions growth until 2030, the draft report found, the target will most likely be impossible to meet, at least without a hugely expensive crash program to rebuild the energy system, and even that might not work.

If emissions do overshoot the target, the report found, future generations would probably have to develop ways to pull greenhouse gases out of the air. It is fairly clear this will be technically possible. It could be achieved, for instance, by growing bioenergy crops that take up carbon dioxide, burning the resulting fuel and then injecting the emissions into underground formations. But such efforts would compete with food production, already under strain.

The leaked draft is the third and final segment of a major report that the climate change panel is completing in stages. The first segment, published in September, found a 95 percent or greater likelihood that humans are the main cause of climate change. The second, due out in March, is expected to warn about the likely consequences of climate change, including risks to the food supply.

The third, focusing on policies to limit the damage, is due for publication in Berlin in April.