Runaway growth in the emission of greenhouse gases is swamping all political efforts to deal with the problem, raising the risk of “severe, pervasive and irreversible impacts” over the coming decades, according to a draft of a major new United Nations report.

Global warming is already cutting grain production by several percentage points, the report found, and that could grow much worse if emissions continue unchecked. Higher seas, devastating heat waves, torrential rain and other climate extremes are also being felt around the world as a result of human-produced emissions, the draft report said, and those problems are likely to intensify unless the gases are brought under control.

The world may already be nearing a temperature at which the loss of the vast ice sheet covering Greenland would become inevitable, the report said. The actual melting would then take centuries, but it would be unstoppable and could result in a sea level rise of 23 feet, with additional increases from other sources like melting Antarctic ice, potentially flooding the world’s major cities.

Some areas of the globe are especially vulnerable to rising sea levels and inhabitants are being forced to make stark changes in their lives. 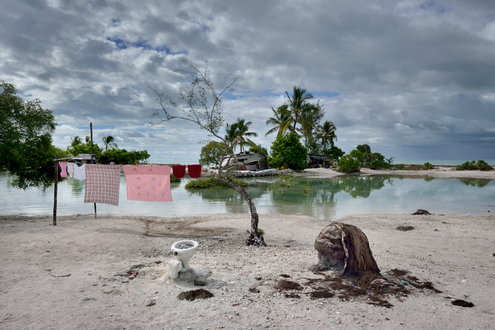 “Human influence has been detected in warming of the atmosphere and the ocean, in changes in the global water cycle, in reduction in snow and ice, and in global mean-sea-level rise; and it is extremely likely to have been the dominant cause of the observed warming since the mid-20th century,” the draft report said. “The risk of abrupt and irreversible change increases as the magnitude of the warming increases.”

The report was drafted by the Intergovernmental Panel on Climate Change, a body of scientists and other experts appointed by the United Nations that periodically reviews and summarizes climate research. It is not final and could change substantially before release.

The report, intended to summarize and restate a string of earlier reports about climate change released over the past year, is to be unveiled in early November, after an intensive editing session in Copenhagen. A late draft was sent to the world’s governments for review this week, and a copy of that version was obtained by The New York Times.

Using blunter, more forceful language than the reports that underpin it, the new draft highlights the urgency of the risks that are likely to be intensified by continued emissions of heat-trapping gases, primarily carbon dioxide released by the burning of fossil fuels like coal, oil and natural gas.

The report found that companies and governments had identified reserves of these fuels at least four times larger than could safely be burned if global warming is to be kept to a tolerable level.

That means if society wants to limit the risks to future generations, it must find the discipline to leave a vast majority of these valuable fuels in the ground, the report said.

It cited rising political efforts around the world on climate change, including efforts to limit emissions as well as to adapt to changes that have become inevitable. But the report found that these efforts were being overwhelmed by construction of facilities like new coal-burning power plants that will lock in high emissions for decades.

A major part of the jump was caused by industrialization in China, which now accounts for half the world’s coal use. Those emissions are being incurred in large part to produce goods for consumption in the West.

Emissions are now falling in nearly all Western countries because of an increased focus on efficiency and the spread of lower-emitting sources of electricity. But the declines are not yet sufficient to offset rising emissions in developing countries, many of whose governments are focused on pulling their people out of poverty.

The new report found that it was still technically possible to limit global warming to an internationally agreed upper bound of 3.6 degrees Fahrenheit, or 2 degrees Celsius, above the preindustrial level. But continued political delays for another decade or two will make that unachievable without severe economic disruption, the report said.

The draft report comes a month before a summit meeting of world leaders in New York that is meant to set the stage for a potential global agreement on emissions that would be completed next year. However, concern is growing among climate experts that the leaders may not offer ambitious commitments in their speeches on Sept. 23, a potential continuation of the political inaction that has marked the climate issue for decades.

The draft report did find that efforts to counter climate change are gathering force at the regional and local level in many countries. This is especially clear in the United States, where Congress is paralyzed and the national government has effectively ceded leadership on climate to states like California, Massachusetts and New York.

President Obama, using his executive authority under the Clean Air Act, is seeking to impose national limits on emissions of greenhouse gases, but he faces profound legal and political challenges as he seeks to put his policy into effect before leaving office in early 2017.

The draft report found that past emissions, and the failure to heed scientific warnings about the risks, have made large-scale climatic shifts inevitable. But lowering emissions would still slow the expected pace of change, the report said, providing critical decades for human society and the natural world to adapt.

“Continued emission of greenhouse gases will cause further warming and long-lasting changes in all components of the climate system, increasing the likelihood of severe, pervasive and irreversible impacts for people and ecosystems,” the report said.

The earth has so far warmed by about 1.5 degrees Fahrenheit above the level that prevailed before the Industrial Revolution, the report found, and that seemingly modest increase is causing the effects already being seen around the world. A continued rapid growth of emissions in coming decades could conceivably lead to a global warming exceeding 8 degrees Fahrenheit, the report found. The warming would be higher over land areas, and higher still at the poles.

Warming that substantial would almost certainly have catastrophic effects, including a mass extinction of plants and animals, huge shortfalls in food production, extreme coastal flooding and many other problems, the report found.

The report noted that severe weather events, some of them linked to human-produced emissions, had disrupted the food supply in recent years, leading to several spikes in the prices of staple grains and destabilizing some governments in poorer countries.