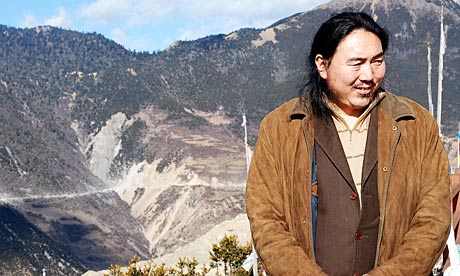 Karma Samdrup – a prominent businessman and award-winning conservationist – issued a statement in court detailing the brutal interrogation methods, including drugs that made his ears bleed, used on him since his detention on 3 January.

“If not for his voice, I would not have recognised him,” his wife Zhenga Cuomao told the Associated Press.

She said Samdrup appeared gaunt when he appeared at the Yangqi county courthouse in Xinjiang, the mountainous province neighbouring Tibet.

Prosecutor Kuang Ying denied violence had been used against Samdrup, who founded the Three Rivers Environmental Protection group and pushed for conservation of the source region for the Yangtze, Yellow and Lancang (Mekong) rivers.

The wealthy Tibetan art collector is an unlikely political prisoner. His group has won several awards for its work, including the Earth Prize, which is jointly administered by Friends of the Earth Hong Kong and the Ford motor company.

In 2006, he was named philanthropist of the year by state broadcasterChina Central Television (CCTV) for “creating harmony between men and nature”.

He was arrested earlier this year and accused of robbing graves and stealing cultural artefacts. Supporters say these were old, trumped-up charges that were dismissed by police 12 years ago. If convicted, the maximum penalty is death or life in prison, though his lawyer says a more lenient sentence is likely.

His trial has been delayed for several weeks amid claims that he is being unfairly punished for lobbying the authorities for the release of his two brothers.

He is accused of illegally collecting information about the environment, natural resources and religion, organising petitions, and providing propaganda material for supporters of the Dalai Lama. Rinchen Samdrup is in custody but has not been tried.

According to the International Campaign for Tibet, this may be part of a new campaign against intellectuals. The Washington-based group said last month that 31 Tibetans are now in prison “after reporting or expressing views, writing poetry or prose, or simply sharing information about Chinese government policies and their impact in Tibet today”. Accusations of police and prison guard brutality are commonplace in China. This month, Wu Lihong – an award-winning anti-pollution campaigner in Jiangsu province – told the Guardian he was beaten by guards during the three year jail sentence he has just completed.

“A state security official name Xie Lixin lashed me with a willow branch and burned me with a cigarette end. A guy name Wang Kewei bump my head against a wall, and another man surnamed Shen beat me to make me confess,” he said. Wu – who is from the ethnic Han majority in China – was declared an Environmental Warrior by the National People’s Congress in 2005 for tackling contamination in Lake Tai. He was later jailed on charges of blackmail.

The hearing was adjourned, it was almost 11 o’clock at night. My husband Turned his head, peeked into the court. They took him away in the other Direction and shut the door, we were once more separated.

In the morning I had felt so distressed and hurt that I only felt extreme Grief, from the afternoon till the evening I had felt anger from all that Justice and injustice. Now, after having received numerous missed calls and Many text messages asking for news, I just don¹t know anymore what I feel.

Early in the morning, around 9:30 am, I saw a police vehicle, I guessed that He might be inside and when the people from inside the car were led out I Almost missed him. Or rather, I just didn¹t recognise him. How could his Tall and upright body become thin and small? The body that passed me looked Like one of a slim and fragile college student.

Before we entered the court, I was already in tears. Relatives and friends didn¹t speak a word, well, what was there to say?! Only when he stood there With his back to us, and started speaking, everyone¹s sadness just poured Out. We all rather closed our eyes, we didn¹t want to look at this cold Shadow, we just wanted to listen to this so very familiar voice only this Was really him, only this really managed to turn that poor fragile shadow into the person we remembered.

I never thought his cheekbones could be this high, his chin so pointy, his Arms so skinny, there¹s nothing left of his pot-belly. And he even tells us That over the past 20 days he had already recovered quite a bit, he had Started eating regularly and does not have to suffer any maltreatment Anymore.

Then he paused for a while, “Today my friends and relatives are here, and There is probably a lot I shouldn’t say.” The account we heard afterwards Exceeded our worst imaginations, we heard about hundreds of different cruel Torture methods, maltreatment around the clock, hitherto unheard of torture Instruments and drugs, hard and soft tactics, and even of fellow prisoners Being grouped together to extract a confession. If he did not reveal certain Details he would be mentally tormented. If he wanted to eat or go to the Toilet he had to write an “IOU”, an “IOU” which has already amounted to 660,000 RMB. The “purchased” food would first be crushed by people using Their feet, there would be beatings for no reason, this was common and Occurred too many times to count. He said in a sad voice that he had already Prepared for death and he had written a letter to tell his relatives what to Do. Two elderly interpreters had red eyes and started crying bitterly.

The lawyer also almost started crying. During the afternoon trial, the Submission of evidence and translations was an endless process, endless but Extraordinary. All of the evidence that was “temporarily put aside”, to my Understanding, contained many loopholes and contradictions. Even the lawyers Seemed to think that much was illegal in the procedures and they raised Their doubts. It was just a pity that the panel discarded them as “unrelated”.