The rise of the Australian Greens has come at the very moment when public support for forceful action on climate change is in decline. Future historians could be forgiven for finding this anomalous, because what appear to be two countervailing trends are occurring in parallel. However, they are part of the same phenomenon.

When Kevin Rudd signalled a retreat from the emissions trading scheme in April last year, in the face of mounting public opposition, the Greens reaped the harvest. For them, heightened scepticism in the public at large has helped deliver more power in Canberra.

At last year’s federal election, the Greens won their first elected seat in the House of Representatives and booted their representation in the Senate from five lawmakers to nine. From this month on, they hold the balance of power in Australia’s upper house, and no legislative proposals will secure passage without their backing, unless Labor can gain the support of the Liberal opposition.

In the House of Representatives, Julia Gillard relies on the Greens’ Melbourne MP Adam Bandt to keep her minority government in power. If the Greens withdrew their support, the government would fall. The Australian Greens have never wielded so much power.

In all, the Greens now have 10 parliamentarians, the most of any third party in Australian politics since the war. Its victory in the seat of Melbourne, an inner city constituency long held by Labor, was also hugely indicative. It spoke of how the Greens have succeeded in attracting affluent progressives: highly-educated, highly-paid and often highly-principled voters who like good coffee and have traditionally supported Labor. 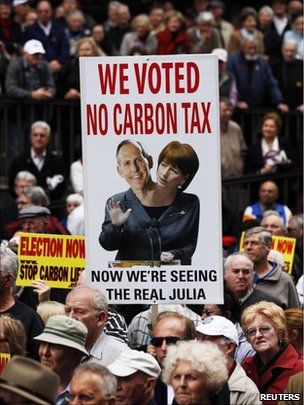 Some people think Labor is too beholden to the Greens

You could build a plausible case right now that Bob Brown, the party’s veteran leader, is the most powerful man in Australian politics. That is certainly how the opposition have tried to portray him: as the de facto deputy prime minister or Julia Gillard’s puppet-master.

So is the rise of the Greens a passing fad, or is it part of a more fundamental realignment of progressive politics in Australia? Put another way, are the Greens cashing in on Labor’s long-term decline?

Peter Hartcher, the political editor of the Sydney Morning Herald, sees this as a potentially seismic shift. “Labor is now in an existential crisis,” he argued. “For the first time, it has a serious political challenger capable of taking seats from its left, as well as the traditional enemy on the right, the Coalition.”

Third parties have come and gone before. At their peak, the Democrats had nine seats in Canberra. Now, the party that vowed to “keep the bastards honest” does not have any.

With power also comes scrutiny, and Labor and the Liberals claim that the Greens are a fringe party with some wacky ideas. Bob Brown has talked about a world parliament based in Australia and also wants to shut down the coal industry, which employs 140,000 people and accounts for $A60 billion in exports.

Others have warmed to the Greens agenda: its demand for the withdrawal of Australian troops from Afghanistan, its opposition to the monarchy, an end to mandatory detention for asylum seekers, a ban on junk food advertising and a lowering of the voting age to 16. In the era of heavily scripted politics – and policy by focus group – many admire Bob Brown for saying what he believes and sticking to his principles.

The irony – Labor insiders would call it the outrage – is that the Greens benefited from Kevin Rudd’s retreat from the ETS, and yet they themselves stood in its path. Had the Greens lent their support in the Senate, when Rudd was trying to get his proposals enacted into law, the measure would have passed. The Greens opposed Rudd’s measure because they did not believe it went far enough, opting for environmental perfectionism, according to the critics, over a compromise deal. Ultimately, however, the Greens have benefited from their own obstructionism. Indeed, at a time when the politics of climate change has played a part in the removal of two prime ministers and two opposition leaders – Brendan Nelson and Malcolm Turnbull – Bob Brown has turned this nettlesome issue to his party’s advantage.

How long the Greens will be able to exercise so much power will be determined to a large extent on how they wield it now. If Bob Brown and his colleagues overplay their hand, they might be punished further down the line. If they are smart, they might put themselves in an indispensable position: as the party that Labor has no other choice but to work alongside if it wants to govern Australia.