Building a Living Practice of Democracy 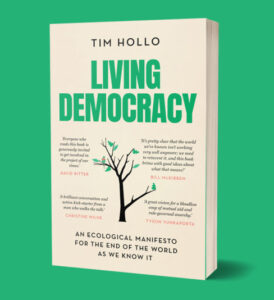 All around the world, communities are living by new models of change-making that are dissolving and distributing power. In this excerpt from his forthcoming book, Director of the Green Institute, Tim Hollo shares some of these stories and the ideas that will enable us to create the cohesive, ecological new communities of the future.

This is an edited extract from the new book by The Green Institute’s Executive Director, Tim Hollo: Living Democracy: an ecological manifesto for the end of the world as we know it. The book is available for pre-order through all bookstores, as well as online here. Sign up for information about book launches and ongoing opportunities to discuss the ideas at the Living Democracy website here.

In a hall in the Upper Hunter Valley, a community riven by disagreement over fossil fuel extraction is meeting to discuss their future.

A quietly-spoken, unassuming woman takes the podium. People shuffle uncomfortably, but if Amanda Cahill is nervous she doesn’t show it. She asks them to share amongst themselves what their community has going for it, what its strengths are. She tells them about other communities, in Australia and around the world, that have faced these confronting times and found their way through them constructively and cooperatively. She leads them to their own conclusions so gently and effectively that they beg her to repeat the workshop three times that weekend!

In an area that consistently elects climate-denying fossil fuel promoters, plans are laid for a community renewable energy cooperative, farm gates are locked against coal and gas corporations, and a divided community forges a common path with confidence and cohesion. Change is brewing.

Across the world in North East Syria, in towns all but destroyed by violent oppression and sectarian fighting, sites of revolutionary battles for decades, a community is meeting. Seats scrape as the co-chairs call the session to order, and discussion begins around water supply, fixing potholes, and school timetables. Any age, any gender, any religion or none, any ethnic background, everyone is welcome to have their say, share ideas, and work towards constructive solutions. In Rojava, against a backdrop of war, poverty and historical divides, they are building their better world, living it day by day, with new communities asking to join their municipal confederation. Change is growing.

These are models of change-making that are dissolving and distributing power by actively enabling people to find real agency in their lives. Embodying Angela Davis’s advice that ‘you can’t simply invite people to join you and be immediately on board, particularly when they were not necessarily represented during the earlier organizing processes’, they’re starting with an open heart, a set of questions, and a deep belief in people, and they’re supporting communities to find their own way together. They’re building a living practice of democracy, and, by living it, bringing it to life.

Elinor Ostrom developed a model for how this works. She wrote of how, in systems based on trust, you have to carefully cultivate that trust through positive tit-for-tat exchanges, scaffolding those exchanges with democratically-developed rules and procedures as you go, and constantly checking it’s working, renewing the trust. It’s this process, building flexible institutional structures around the behaviours and norms we develop in practice, that sees us forge the path from community projects to transformative, systemic change.

Activist and blogger, Sophia Burns, encapsulated this idea of scaffolding beautifully in a piece written shortly after Donald Trump’s election:

As Burns and Ostrom explained, and communities from Barcelona to Kurdistan to Wangaratta are showing, that iterative process of seeding, tending, cultivating and growing is crucial. We practise behaviours with each other. We listen and watch and respond. We set expectations of each other and ourselves, monitoring and re-evaluating as we go. We turn the practices into new norms and institutions, replacing the old ones on the way.

In this way, the journey is the destination, the means is the end. We change the world, while operating in it as it currently is, by living in it as we wish it to be, making life better in our communities as we work to make life better for everyone.

And that simple act, living as we wish to live together, can be a truly transformative one, particularly at a time when dominating power is already shaky. Remember what Ester Boserup told us: that the simplest way to control people is to ‘deprive [us] of the right to be independent cultivators’? What if we take back that right, and start to cultivate what we want? What if, through community sharing economies we demonstrate that we can create genuine abundance and make life better than capitalism can? What if, through community cohesion, we show we can keep people safer than the state can? What if, through community assemblies, we give people first-hand experience of a better way of making decisions than adversarial politics? What if, just as the systems of power that caused the mess we’re in are collapsing, we create cohesive, coherent, ecological communities all over the world that do the job better?

Crucially, this will involve multiple interwoven paths, not a one-size-fits-all solution imposed from on high. Each community, each group, needs to find its own way, and many of us will follow several different paths at the same time. We’ll learn from each other, cross-pollinating as we practise these different ways, each project filling a particular niche as a complex, interconnected ecology develops.

Here in the interregnum, as the old world is dying, we’ll midwife the new world, wean it, set it on its feet to toddle, and watch it learn to run.

Tim Hollo is the Executive Director of the Green Institute and was the federal candidate for Canberra in the 2022 election.