The India Greens Party: Slowly and strongly growing, powered by the grassroots of society

Founded a little over 3 years ago, the India Greens Party (iGP) is establishing itself as a future force in Indian politics. On 17 and 18 November, the party staged its second and biggest National Convention. Despite being a virtual event, it was a huge occasion, for both the party, the Green movement, and the future of politics in India. I caught up with two of the iGP leaders to discuss the future of India’s Green Politics.

Suresh Nautiyal is the outgoing Founding President of the India Greens Party and one of the key intellectual figures in the Asia-Pacific Greens movement. Being replaced by two Co-Presidents (female and male), Mr Nautiyal is now the Chief Spokesperson of the party; besides being Founder, Patron and Mentor of it. In the past, Suresh experimented with the different communist, socialist and progressive political ideologies and parties; but at the end of the day realised that it was Green Politics that he actually was searching for.  This realisation came to him in 2005 when he visited Kyoto (Japan) to attend the congress of the Asia Pacific Greens Network, which is a federation now, and was elected to the then APGN Board.

After this, there was no looking back.

Michael Rajchandra is the iGP’s International Co-Secretary, a key player in the Asia-Pacific Greens Federation, and known as someone who knows how to get things done.  Living in one of the world’s most polluted cities gave Michael more than enough reasons to put aside his IT qualifications and to work with the India Greens Party in Delhi.  Michael used to hate politics because he could never understand it.  Politics in India took a dangerous turn in 2014, with Narendra Modi’s Hindu ultra-nationalist Bharatiya Janata Party (BJP) gaining power. Anyone opposing the BJP’s far-right policies have been labelled anti-Indian, and many slapped with sedition charges, while minority communities continue to be repeatedly targeted, harassed, and sometimes even lynched. Michael joined many Non-Governmental Organisations (NGOs) and campaigned and demonstrated with fellow activists as much as he could. “But protesting is not enough, as at the end we are at the mercy of those in power running the government to heed to our requests and demands,” says Michael.

He realised that the real power to make decisions that would protect the world and efficiently implement them was possible only when one was part of the Government, and that politics had become bad because good people stayed away from it. “Joining a legitimate political party, which accepts the real-world scientific research to reveal the damage of our way of life, is the only way,” he adds.

“India is supposed to be the largest democracy in the world, so we didn’t face any kind of obstacle in founding the Greens Party of India,” Suresh Nautiyal explains. “But to find people and enrol them as members was a daunting task.  It’s still a fact that not enough people in India believe in Green Politics being the way of the future. They still do not have any idea what climate change is.  We interacted with many environmental NGOs in the two years prior to the iGP foundation to encourage them to join the Greens, but nobody was willing.  Their excuse was that if they joined this movement at a political level, they would face problems from the government side.”

Suresh says the problems came from the rightist party ruling the country, the BJP, with Narendra Modi as a leader.  “The BJP doesn’t like progressive political movements and they have their own definition of nationalism, patriotism and even religion,” says Nautiyal. “So we face certain challenges.”

The iGP held a Green Camp for its Political Affairs Committee (PAC) members a few weeks ago. Being his brainchild, Michael’s involvement was crucial to its success. “The idea was first raised in answer to questions about how people in India would support us when they don’t even know about Green politics,” he says. Michael had attended other training camps with NGOs like Greenpeace and others, and he knew an offline, interactive, engaging and relationship-building Green Camp, (which is part of his visualization of iGP’s Green Education Mission) would be the best way to attract, select and activate members, volunteers, supporters – even green leaders. “We have to be able to educate people,” says Michael.  “The participants presented training on various topics starting with Understanding Human Values, Ethics, Principles, Responsibility & Justice, Developing Scientific, Critical, Logical, Rational and Unbiased Thinking which is essential to understand the Six Green Principles, be able to make the right decisions, choices and be Green. This is followed by the history of the Greens, the important, urgent need for Green politics now, even the latest science of climate change, and the causes of this great loss and damage India is experiencing, right now.”

They also presented sessions on the principles of nonviolent direct action.  “We realised that we needed two types of Green Camps: one for grassroots education, recruiting members and volunteers, and the other for the training and induction process of our Office Bearers with a more rich and detailed syllabus, as they have to be fully green first and on the same page as us. Only then could we expect others to be green,” Michael explains.  “We needed to be sure that both our prospective Green Party members and Office Bearers were made welcome and to feel part of the family.  As this green camp was held for PAC members, there was in-house training, inspiring the membership, motivating them to be more committed. Bringing them into our Green family so they understood how it all operated as one and how it’s different from other run-of-the-mill Parties.  It was important for them to know we were all here to serve as activists and social workers and not politicians.”

COP26 should have been the end for coal, with a solid plan to transition out of fossil fuels. Instead, all that could be managed is a so-called ‘phase down’, which was proposed in the COP plenary by India’s right-wing government.  The India Greens Party was most disappointed at that dramatic last-minute watering down of the ‘Glasgow Pact’.  The iGP was also disappointed that the Indian Government never actually signed the British PM’s proposal to stop deforestation by 2030.

Politics is complicated in India. So many opinions and cultural elements. As one of the fastest-growing and influential Asia-Pacific Greens Federation member parties, the India Greens Party staged its National Convention a few short weeks ago. This was obviously an important occasion.  “This was our second national convention,” explains Suresh. “Even though it was staged entirely virtually, our team is now very representative, inclusive and comprehensive.  We have two Co-Presidents now, representing marginalised communities. One of them is quite young, and the other one is an experienced person — at gender parity, we have one woman and one man in charge, as was our dream. We have almost all sections of society represented in the national executive.”

Suresh is particularly proud of the selection of the new executive and is happy to pass the baton to the new team.  “We have the party’s footprints in 27 states and union territories of the country.  Several of these are represented in the National Executive Committee — all very intelligent people, with solid green commitments, and who can think outside their space,” he says. “In 2024, we will be fielding candidates in the National Parliament. Before that, we will field candidates in the State Assemblies. Be assured, we will be a party to reckon with. That day is not far ahead!” 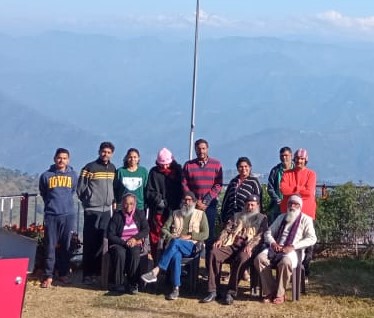